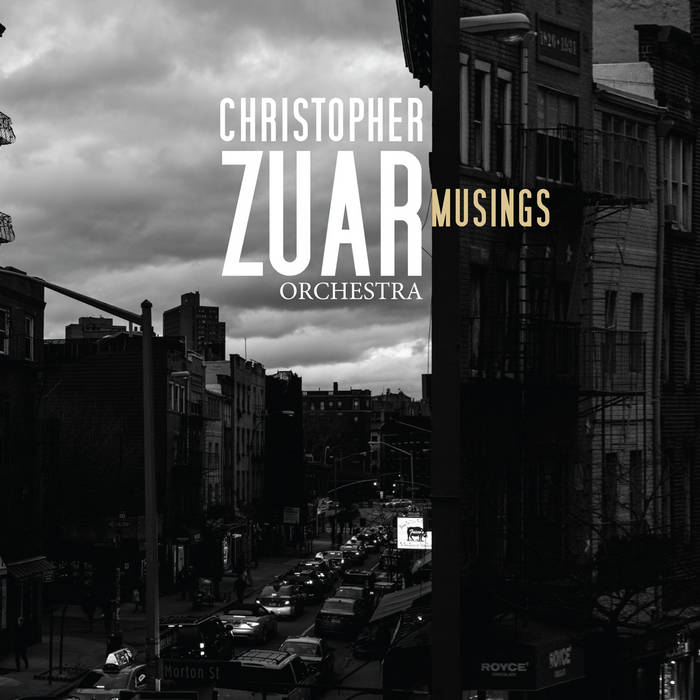 The mind has a tendency to wander – the artist just knows to follow
where it leads. Whether struggling with personal issues, searching for
one's place in life, reflecting on loved ones or simply observing life
as it passes by the nearest window, one’s muse can take many forms,
all capable of leading to inspiration. For his new recording, Musings, composer/arranger Christopher Zuar incorporates a variety of emotional and musical sources to create a program of highly original, self-reflective and expressive compositions performed by an extraordinary ensemble. The recording will be released April 1, 2016 – Zuar’s 29th birthday.

Hailing from Long Island, New York, Zuar found his interest in music early. He began playing the trumpet in elementary school; he remembers being equally engrossed by classical and jazz. He recalls receiving recordings of Maurice Andre and Louis Armstrong simultaneously and being enthralled by both. Zuar’s interest in composition led him to his mentor, pianist/composer/arranger Mike Holober, from whom he learned the essentials of music writing.

This led to Zuar’s study at the New England Conservatory, where he quickly switched from a jazz trumpet major to composition, insuring that he could write for the various ensembles and study with Frank Carlberg, who appears on Musings. Upon moving back to NY, Zuar was accepted into the prestigious BMI Jazz Composers Workshop, and eventually received a master’s in composition from the Manhattan School of Music, where he studied with Jim McNeely.

Naturally, Zuar was inspired and informed by many of his forebears, including Bob Brookmeyer (Zuar went to NEC in order to study with Brookmeyer), Gil Evans and Thad Jones as well as a multitude of composers from the classical realm. Having always been interested in the intricacies of structure in the world of both classical and jazz music, Zuar’s attention was drawn to composition, scoring for orchestral sound with a focus on melodic lyricism and harmonic richness.

The musical results prove the ensemble’s astounding flexibility and prowess. Most of the members come from an earlier generation than Zuar, musicians he had grown up admiring but who are now brilliantly performing his music as peers.

The recording begins with “Remembrance,” an older piece that ironically is based on the writer’s recollections of his childhood and familiar places as he considers where he has come from and where he is going. Inspired by one of Zuar’s major influences, J.S. Bach, “Chaconne” shows Zuar’s adaptations of the lessons from the master’s contrapuntal style and places them in a moving modern framework. Written during a time of existential crisis, the intense “Vulnerable States” mirrors Zuar’s emotional state by using a variety of musical techniques to convey a sense of instability, while the swaggeringly upbeat “Ha! (Joke’s on You)” references the knowingly cynical look from his eccentric, worldly grandmother.

The anguished “So Close, Yet So Far Away” captures the feelings of discontent and yearning in the shadow of success and features a remarkable solo statement from Jason Rigby, which fits the sentiment perfectly. The powerful “Anthem” was written as a proclamation of strength and perseverance, while “Lonely Road” is an exercise in simplicity and a reflection on the transformation of New York’s Greenwich Village, in particular the views of Bleecker Street that Zuar sees from his piano while composing. An arrangement of the great Egberto Gismonti’s “7 Anéis” concludes the program with an uplifting performance, where Lawry’s vocals really stand apart.

Christopher Zuar has learned a great deal about himself through his composing. It is only natural that the pieces he has put to paper should reflect his attitudes and emotions, and it is only proper that the recording Musings is a fascinating collection of compositions from this promising new talent.

Bandcamp Daily  your guide to the world of Bandcamp

Featuring Oakland sounds from the Smart Bomb collective and Samplelov.